The Grove Hall Library is an urbanly located branch of the Boston Public Library. In the latter half of the nineteenth century, the library worked vigorously to develop and expand its branch system. Viewed as a means to extend the library’s presence throughout the city, the branch system evolved from an idea in 1867 to a reality in 1870, when the first branch library in the United States was opened in East Boston. Between 1872 and 1900, twenty-one more branches began serving communities throughout Boston’s diverse neighborhoods. Today, twenty-five branches serve the 670,000 residents of the City of Boston, with recent renovations and new branches in locations including East Boston, Jamaica Plain, Chinatown, Dudley, and Roslindale, with ongoing capital project investments designed to improve the BPL systemwide. 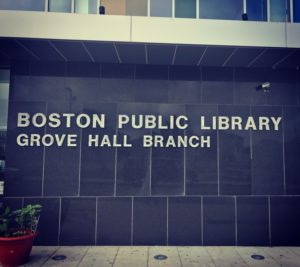 This event is free and open to the public
Special Guest appearance and presentation by Andrea Campbell,
President of The Boston City Council, District 4 Representative.
Post-screening discussion will include a Q&A segment with the Documentary’s Cast.

The event is finished.

Free and Open to the Public